Shiny summertime, freedom, love and the greatest bands from all over the world: this is what the summer festivals in Hungary offer to you... come and join us! You can buy tickets on this webpage, or you can take a short overview about the festivals below.

The Sziget Festival is one of Europe's biggest open-air events. This year Sziget will take place between 12-18 august. The organizers of Sziget Festival plan to have a shorter event with a stronger program for next year. Sziget Festival is going to be five plus one day long. This is a result of an ongoing affair in the background. The mayor of a neighbourhood district has sued Sziget for the disturbing noise which had bothered its citizens.
Already confirmed acts: Iron Maiden, R.E.M., Sex Pistols, Die Arzte, Kaiser Chiefs, Serj Tankian, Jamiroquai, Exodus, Avantasioa, Apocalyptica, Natacha Atlas & Transglobal Underground, Róisín Murphy, Lauren Harris.. the list is continuosly growing!
Sziget Festival 2008.
12-18th August 2008.
Budapest, Obudai island
http://www.sziget.hu
Order your tickets now. 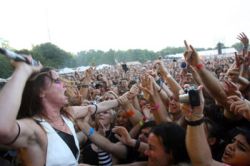 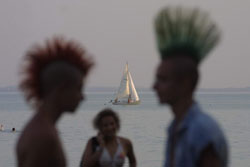 A great musical adventure by the "hungarian see", the lake Balaton. After its debut in 2007, Balatone Festival is here again, and gives you a chance to catch great bands, have a great party, know new people, make fine excursions, swim in the lake Balaton. You can try also many sports: the international Fundango Water Jump Competition and the Kona Bycicle Meeting is also part of the festival.
Already confirmed acts: Beatsteaks, Noisia, dj Teebee, a Real McKenzies, a Cagedbaby, és a Free Form Five, DJ Hyper.. the list is continuosly growing!
Balatone Festival
24-27th July 2008.
Zánka, Youth Camp
http://www.balatonefestival.hu
Order your tickets now. 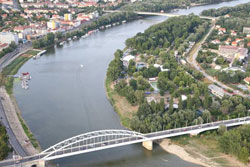 SZIN Festival will again be the biggest summer-ending party at the last weekend of August between 27-30th. The Youth Days of Szeged (Szegedi Ifjúsági Napok, SZIN Festival) was founded in 1968, and at this time this was the only youth festival in Hungary. Every year there were thousands of young people visiting Szeged because of the great programme and the "feeling" of those few days in the "city of sunshine". Last year we will had 8 program places including five stages. There number of visitors was almost doubled which is really remarkable. We had such performances on the main stage like: Kosheen (Live), Apollo 440, Freestylers dj, dj Spor, Superhiks (MK) and the leading Hungarian festival performances.
The site of the SZIN is an open-air swimming pool and campsite in the heart of the city, 5 minutes walk from the city centre with all the necessary facilities (shower, WC etc) which are inevitable to feel comfortable.
Already confirmed acts: Morcheeba; Phats and Small, Russkaya, and they are waiting for confirmation from several other foreign acts.
SZIN Festival (Szegedi Ifjúsági Napok, Youth Days of Szeged)
27-30th August 2008.
Szeged, Újszegedi Partfürdő
http://www.szin.org
Order your tickets now. 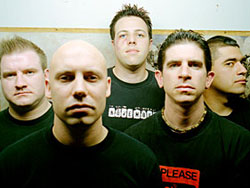 The Azfeszt exists since 2004 as a music festival and by now it's an outstanding event of the Eastern-Hungarian region. As a non-profit organization the organisers main goal is to activate the youth and to attract them to Nyírbátor at least during the summer. Besides the talent scouting competition, the festival contains mainly concerts of Hungarian and international bands. The performers are chosen from the bests bands of Hungary.
The location is situated in the beautiful natural surrounding of the thermal bath and camping of Nyírbátor. Taking advantage of the possibilities provided by the area, Azfeszt provide not only amusing music programs but also unlimited bathing on the beach and different kind of sports during the whole duration of the Festival.
Already confirmed acts: Death By Stereo, Bloodclot!
Azfeszt
30th July - 3rd August 2008.
Nyírbátor, Thermal Bath and Camping
http://www.azfeszt.hu
Order your tickets now.