History
Until the beginning of World War I. the building housed an orpheum bar. When the war broke out "the palace of entertainment" closed, marking the end of the golden age of the orpheum. This is meant the end of what was later nostalgically called "the happy times of peace." 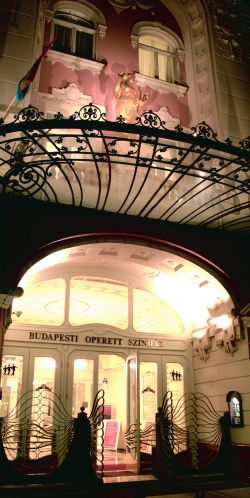 In 1923 the city of Budapest decided to give the genre of operetta a home of its own. With the opening of the Metropolitan Operetta Theatre the Hungarian capital saw the beginning of the "silver operetta" period by giving a new and permanent home to the genre after Népszínház and Király Színház. In the history of the theatre the most important thing was to cherish the traditions of the classic operetta while enriching it with modern artistic solutions. Next to Vienna Budapest is the other capital of the operetta and anyone who comes to our theatre can see the high quality of the genre represented here.

Since the mid-sixties this multitalented ensemble has been presenting musicals to great critical and popular acclaim: My Fair Lady, Hello Dolly!, West Side Story, Fiddler on the Roof, Funny Girl, Cabaret, La Cage Aux Folles, The Sound of Music, Somewhere in Europe to name but a few.

Building
The Operetta Theatre's present house was built after the plans of the famous Viennese architect-duo Fellner and Helmer in 1894. The spacious stage of the main auditorium were surrounded by intimate booths in a half-circle on both sides, while a dance floor ensured enough room for the waltz, polka, mazurka and the galopp. Its decorative winter garden housed the most exquisite French restaurant, while on the street front a concert café was opened.

In 1966 the building was rearranged, whereby the inner architecture and rooms were changed to a great extent. Between 1999 and 2001 it was completely refurbished. The most modern European stage technology was built in and the beautiful original decoration was regained along with the balcony row of the auditorium.

Today the theatre has 901 seats in an air-conditioned auditorium.

The former objects which remained in the building - lamp statues and columns keeping the row of boxes - are in perfect harmony with the new colourful glass windows, the mirrors, the period furniture of the buffet and the wooden floor.

The auditorium is lit by a hundred-year old chandelier. The row of boxes, the golden stuccos, the walls dressed in velvet and the allegorical statuettes decorating the entrance elevate your theatre evening into a real feast.

The inner space was designed by Mária Siklós and Gábor Schinagl. The management of the Budapest Operetta Theatre considers it its duty to work as a multifunctional cultural centre in local art and social like in this beautifully refurbished building of old grandeur. 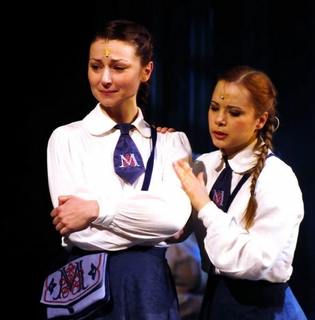 During the time of Miklós Gábor Kerényi as director the Budapest Operetta and Musical Theatre is more than a venue for simple musical shows. In the past years is has become a modern European music theatre of two branches, where traditional values are represented by a new operetta concept, while modernity is present in the literary and historical musicals.

This theatre is one of the centres of Budapest's cultural and social life with nearly 500 shows a year frequented by nearly half a million spectators every year and tickets sales nearing 100%. In 2006/2007 492 performances entertained 401.079 viewers.

The theatre's musical and operetta productions are equally successful. Romeo and Juliet, Mozart!, The Beauty and the Beast, Wedding Dance, Rudolf, Elisabeth and Abigail are sold out months ahead, while The Fledermaus, Countess Marica, The Merry Widow and The Kissing Woman are awarded by standing ovations.

The written and the electronic media discuss new premieres and show in their central pages, while commercials and promotion are sponsored by the most significant Hungarian media.

The theatre's leading soloists are real stars, who excel with their achievements and personalities and who enjoy the attention of the media.

CD-d and DVD-s of shows soon become gold and platina albums and DVD-s sell in the thousands.

Tens of thousands of young fans follow the events at the theatre and wait for the actors at the stage door. They analyze and discuss shows on internet forums and are present at every important event, which the theatre e-mails them about.

In the past few years the Budapest Operetta and Musical Theatre has become a renowned and sought-after company internationally. Its operettas and musicals tour in different theatres and at different festivals of Europe regularly. The theatre travels to Japan every year, but has also performed in the United States and several countries of Asia. Coproductions are frequent with Vienna, Saint Petersburg, Prague and Yekaterinburg.

Related websites:
Order your tickets online, and print them at home by Ticketportal
http://www.operettszinhaz.hu/